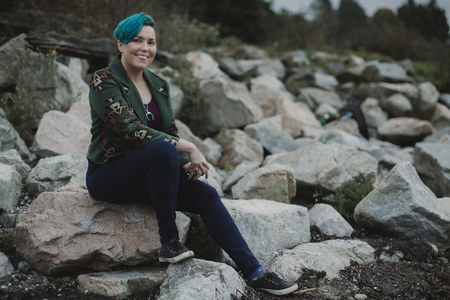 “Alina’s work educates the public about issues of identity, including Indigenous experiences in Canada. Indigenous youth are the fastest growing demographic in Canada, and it’s nice that they will see themselves in the current pop culture trends. We are very happy to honour her with this year’s Leadership Award”

Alina Pete (they/them) is a nehiyaw (Cree) artist and writer from Little Pine First Nation in western Saskatchewan. They grew up urban, but spent summers wandering the Qu’Appelle valley with their cousin from Cowessess First Nation. Alina is best known for their Aurora award-winning webcomic, Weregeek (weregeek.com), but they also write short stories, poems and RPG supplements, and their work has been featured in several comic anthologies, including Moonshot Volumes 2 & 3. Alina lives in Surrey with their partner and three very silly parrots who enjoy sitting on their shoulder as they write.

“Kids love comics, and even kids who struggle to read other kinds of books can pick up a comic book and find something that they can really engage with. I’m eager to produce comics that Indigenous kids can pick up and see themselves reflected on the page.”

Alina’s community leadership is distinctive because they use art to educate the public about issues of identity, including Indigenous experiences in Canada. Alina’s work was chosen to be part of the Comics in Transit project (2019 & 2021). This public art installation was displayed in bus shelters throughout the GVA and examined the theme of Indigenous family through the lens of intergenerational trauma. They have also worked with a group of children who were recent immigrants to Canada to come up with a piece of public art that is on display as part of The South Vancouver Story Swap.

Alina has published comics in The Land is Everything: Treaty Land Entitlement published by the Office of the Treaty Commissioner (2014), and is a frequent contributor to the Moonshot anthologies, which examine Indigenous storytelling and realities through comics. Most recently, Alina was invited by The Gord Downie & Chanie Wenjack Fund to work on a short film about reconciliation as part of the ReconcilliACTION program. Alina uses their talents as a visual and oral storyteller to “animate” group facilitation and believes that images can bridge gaps that words alone cannot. Alina is a sought-after speaker on topics associated with Women/LGTBQA people in the Comic industry, Indigenous peoples in comics/animation and representation and inclusion. Alina hopes to work with and inspire the next generation of Indigenous comic artists.

Most recently, Alina was the co-editor on The Woman in The Woods and Other North American Stories, a comics anthology of Indigenous legends, and the fifth volume of the acclaimed Cautionary Fables and Fairy Tales series. Alina was committed to making sure the anthology was done by Indigenous artists and writers, many of whom were previously unpublished, and that proper protocol was followed for the retelling of these stories. “All Indigenous stories belong to the nations who tell them, not to any individual storyteller, so part of the work we asked our writers to do was to practice proper protocol and ask for permission from their own nations to tell the stories in this anthology.”

“I am very honored to receive this award. The responsibility to contribute to your community is very important to me, and doubly important now that I’m living away from my home community of Treaty 6 territory here on unceded Kwantlen lands. I want to make sure that Indigenous youth see themselves represented in media and hope to continue to mentor the next generation of Indigenous cartoonists.”

Can I Pet Your Werewolf:

The Woman in the Woods and Other North American Stories:
https://www.kickstarter.com/projects/ironspike/cautionary-fables-and-fairy-tales-north-america